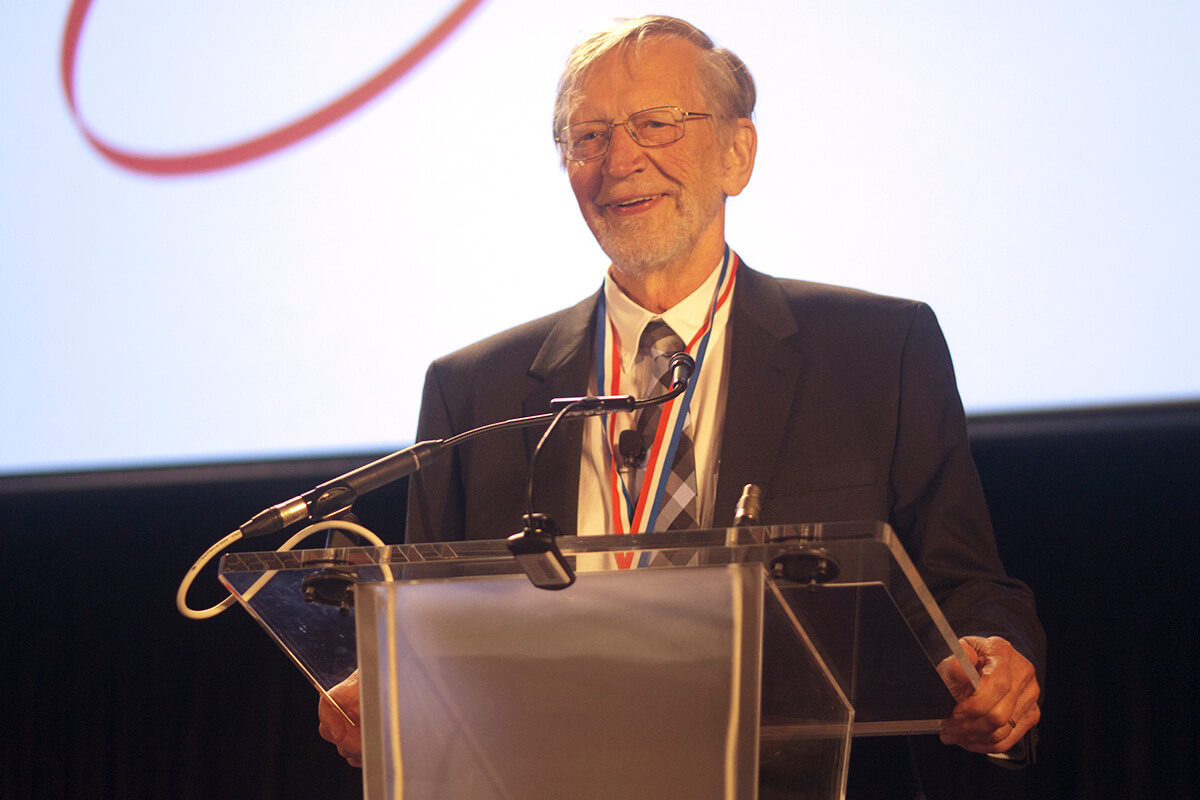 Alvin Plantinga speaks at the 2017 Templeton Prize ceremony at The Field Museum in Chicago on Sept. 24. Photo courtesy of Templeton Prize/Clifford Shirley

The legacy of Notre Dame philosopher Alvin Plantinga will continue on for years thanks to support from the John Templeton Foundation. 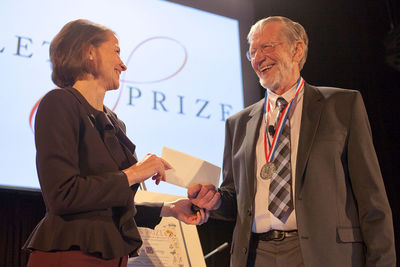 Plantinga, the John A. O’Brien Professor of Philosophy Emeritus in the College of Arts and Letters, was named the 2017 Templeton Prize Laureate this spring, joining the ranks of previous winners Mother Teresa, Aleksandr Solzhenitsyn, Charles Taylor, Jean Vanier, Archbishop Desmond Tutu and the Dalai Lama.

Alvin Plantinga receives the 2017 Templeton Prize from Heather Templeton Dill, president of the John Templeton Foundation, at a ceremony at The Field Museum in Chicago on Sept. 24. Photo courtesy of Templeton Prize/Clifford Shirley

He officially received the honor — valued at about $1.4 million, one of the world’s largest annual awards given to an individual — at a gala and ceremony at the Field Museum in Chicago in September. He was also honored on-field (see video below) at Notre Dame Stadium by University Provost Tom Burish and Templeton Foundation President Heather Templeton Dill during a football game against North Carolina State.

At Saturday’s NDFootball</a> game, <a href="https://twitter.com/NotreDame?ref_src=twsrc%5Etfw">NotreDame philosopher Alvin Plantinga was honored on the field for winning the @Templeton_Fdn Prize. pic.twitter.com/WCofvjOP6v

Over his 50 years of research in philosophy of religion, epistemology, and metaphysics, Plantinga has advanced landmark arguments for the existence of God, returning the questions of religious belief to the common discourse of academic philosophy.

Plantinga’s work will also now be chronicled in a series of 10 short, animated videos, which will present many of his central arguments in a visually captivating style designed to appeal to a wide audience.

With funding from the Templeton Foundation, the project will be led by Michael Rea, the Rev. John A. O’Brien Professor of Philosophy, and Samuel Newlands, the William J. and Dorothy K. O’Neill Collegiate Associate Professor in Philosophy. The production team, which also includes Joshua Seachris, program director of Notre Dame’s Center for Philosophy and Religion, and Hud Hudson, professor of philosophy at Western Washington University, will work in collaboration with the animation studio Hand on a Whiteboard.

Rea and Newlands are directors of the Center for Philosophy and Religion — which Plantinga led for more than two decades.

“In recent years, the center has been working to engage a broader public audience with our projects and research,” Newlands said. “With this new project, we hope to continue and expand this public engagement.

“Plantinga has been one of the most influential philosophers of religion over the past half century. These engaging videos should help non-philosophers better understand why Plantinga is so richly deserving of this prize. We hope the videos will also, in turn, fuel further public interest in the work of the center that Plantinga himself directed.”

Plantinga’s major achievements include his free-will defense, which refutes the logical problem of evil – or the belief that evil cannot logically coexist with an all-powerful, all-knowing and all-benevolent God – by countering that even an all-powerful God could not create free creatures who always choose good; consequently, an all-benevolent God could not stop evil without eliminating the still-greater good of free will. His view has been widely accepted, even among proponents of the original atheistic argument.

He is also renowned for his epistemological argument that belief in God can be rational without requiring arguments or evidence, claiming that it is difficult to prove that belief in God is irrational and possible to suggest ways in which belief meets the requirements of rationality.

Plantinga’s later work focuses on the logical relationship between religion and evolution.

A Guggenheim Fellowship recipient and fellow of the American Academy of Arts and Sciences, Plantinga has twice delivered the Gifford Lectures. He is the author of numerous books, including God, Freedom, and Evil, Faith and Rationality, Warranted Christian Belief, and Knowledge and Christian Belief.

Originally published by Arts and Letters at al.nd.edu on January 05, 2018.