A public debate on the ethics of immigration and citizenship

Join us for a debate between two world-renowned experts on the ethics of immigration and citizenship, Dr. Jason Brennan (Georgetown) and Dr. Christopher Heath Wellman (Wash. U), on Thursday, December 5th from 5PM until 7PM in DeBartolo 101. The debate will be moderated by Dr. Graham Clay (Notre Dame). It will concern what United States immigration policy should be, whether nation-states have the right to exclude migrants, and what it is to be a citizen of a nation-state. Dr. Brennan defends a version of the so-called "open borders" position on immigration, while Dr. Wellman argues that nation-states have a right to control their borders as they please. There will be an open Q&A period after the debate for audience members to ask questions of the debaters. For those who are unable to attend, there will be a livestream furnished by ND Studios on the Philosophy department Facebook page.

This event is sponsored by the Constitutional Studies program, the Hayek Fund for Scholars at the Institute for Humane Studies (IHS), the Philosophy, Politics, and Economics (PPE) program, the Dean’s Fellows of the College of Arts and Letters, the Philosophy department, the Program of Liberal Studies (PLS), and the Klau Center for Civil & Human Rights, and it is supported by a Teaching Beyond the Classroom grant. 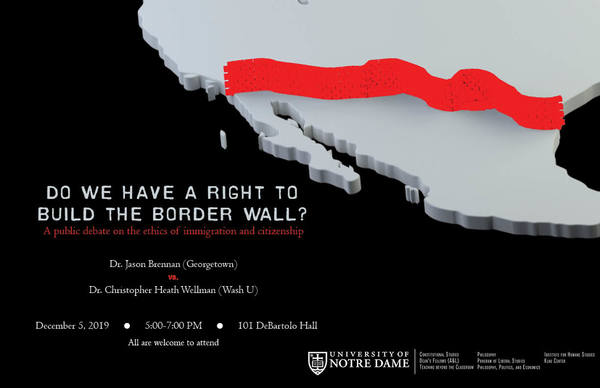