Ellen Lehet will be giving a talk titled "Impurity in Contemporary Mathematics" for the March 6th Grad Student Colloquium from 6:30-7:30. Pizza provided!

Topical purity has been discussed as a possible ideal of proof. There is certainly
evidence that mathematicians in the 19th century believed it to be an epistemic advantage, but contemporary mathematicians appear comfortable with, or even particularly attracted to, methods that their predecessors would have called impure. Some of the major  areas of contemporary mathematical research combine seemingly distinct areas of mathematics --- e.g., algebraic topology, algebraic geometry, category theory, etc. In such cases, it seems that topical determination --- i.e., the identification of the topic of a given theorem --- is not possible or meaningful. In this talk, I will consider whether topical purity is possible in contemporary mathematics. I will also discuss how the impure methods that now pervade mathematics prove to be epistemically advantageous. I will carry out this discussion by considering two examples. First, I will consider a theorem in algebraic topology that requires consideration in both the domains of topology and algebra. Second, I will consider a category theoretic result of which there are several corollaries, all in different areas of mathematics, that are important results in their own domain. These two examples will demonstrate that the subject matter of mathematics has changed in such a way that purity of proof no longer plays the epistemic role that it did in the 19th century 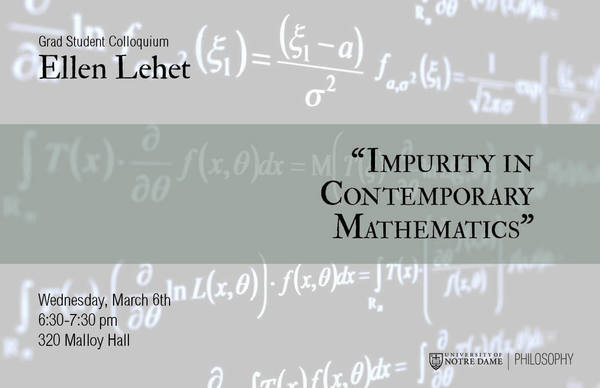