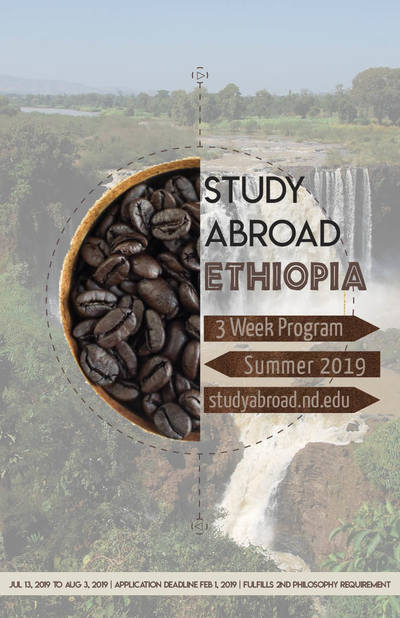 This summer, Notre Dame is organizing a Study Abroad program in Ethiopia, led by Professor Alexander Jech. The program is centered on the course PHIL 24550 / PHIL 44468 Bridging Theory and Practice: Philosophical and Pragmatic Perspectives on Development. We interviewed him about the program and how it came into being:

How did you come up with this idea?

My wife Koelle and I have done work supporting orphans and other impoverished children in Ethiopia for several years. We love the country and its people, they are both very proud, very hospitable, and very proud of their hospitality. We have learned a lot from them. Anyway, a couple of years ago, I was in Ethiopia and talking with a man named Tesfa, then the director of the program we were associated with. Eventually the conversation came around to higher education, and he said: “Do you know what would be really good for your students?” And then he explained the idea of a study abroad program in which both American students and Ethiopian students could study economic development together. By placing the students together, both groups would learn far more than they could from studying the ideas and texts alone.

Two years later, I returned to Ethiopia with a grant from the Center for Social Concerns, met with professors, directors, and deans, we hammered out some arrangements. Somehow the momentum of that conversation carried through all the way through to generating a study abroad program—a program I expect will continue to grow in subsequent years.

Where are the places you will be visiting?

The main course will take place in the capital, Addis Ababa. We will be located on a little campus named Hope College where we can fit in without getting lost in a larger, more sprawling space. But we will have plenty of time to get out into the city and the countryside. We will be visiting the Ethiopian National Museum and a couple of historic Ethiopian churches in Addis Ababa. And of course we’ll get to tour one of the local coffee factories, and sample the coffee in the café next door.

The big outing, though, will happen during the second weekend. We will be visiting the Blue Nile Falls—one of the main sources of the Nile River—along with the Semien Mountains and the ancient capital of Gondar, which is the site of some spectacular medieval castles, including Gondar Fasiledes.

(The ears of Tolkien fans no doubt perked up at this. Yes, Ethiopia is a very ancient civilization, and the ancient capital had a period of glory and a period of decline; but no, it’s never been proven nor disproven that Tolkien—who was raised in South Africa during a time when Ethiopia would have been in the news—based the name “Gondor” on the name “Gondar,” although there are several other place names in Ethiopia that resemble names of places in Middle Earth: Rohan and Roha, Harad and Harar, Barad-dûr and Bahir Dar. Coincidence? Purposeful? The ever-creative authorial subconscious? Who knows!)

What's the connection between Ethiopia and ND?

The connection is this: Notre Dame students are super smart, but also very practically minded. They love to do things and make a difference. A lot of them also approach this from a kind of religious background based on ideas drawn from the Catholic social tradition and with the goal of living up to the Prophet Micah’s injunction “to act justly, to love kindness, and to walk humbly with your God.” Some of them, of course, come to this mindset from other, secular ideals of liberty, justice, and equality. Ethiopians working in development are similarly often, but not always, driven by religious ideals to care for the widows and orphans and the most vulnerable in their own society, but these ideals come from Ethiopian religious traditions rooted in Ethiopian Orthodoxy or in Ethiopian Protestant denominations. Many of those working in food security and development were trained in an “underground seminary” that was founded under the Derg, a communist regime that persecuted Christians, but who were drawn into the work because of concern for the suffering of others. This is a very different context than those that Notre Dame students are used to, but it is the combined similarities and differences that make this such a promising opportunity for many students at Notre Dame.

Then they should drink Ambo! It’s a wonderful brand of flavored sparkling water that is served in most restaurants, and you can pick it up—along with regular bottled water, tea, etc.—at any convenience store. But if you are invited to a coffee ceremony, just fake it!

If you are interested, please visit https://studyabroad.nd.edu/programs/ethiopia-summer/ and consider applying! The program is open to everyone, including graduating seniors.