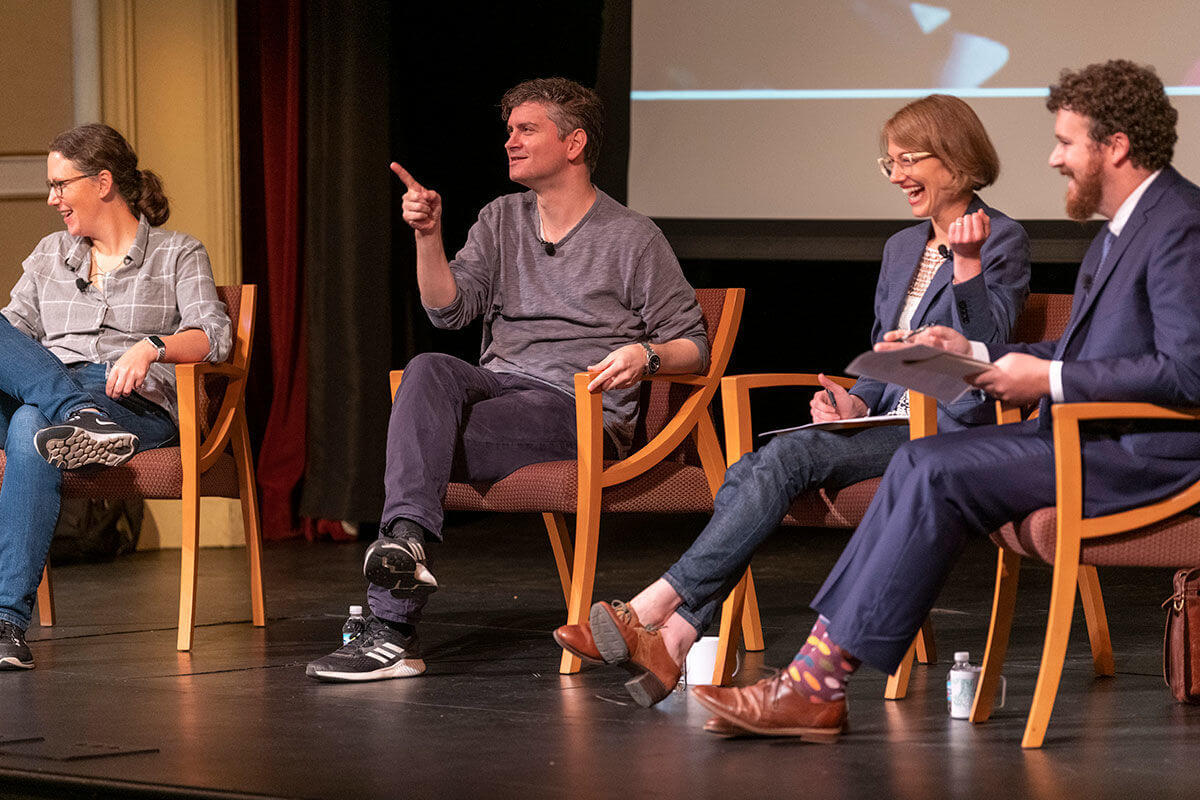 Mike Schur (second from left), the creator of multiple hit TV sitcoms, makes a joke during a joint session of the introductory philosophy course God and the Good Life.

Senior Mary Crawford is spending hours this semester in a class exploring the production and philosophy behind one of her favorite TV shows — NBC’s The Good Place.

The groundbreaking sitcom starring Kristen Bell and Ted Danson is set in the afterlife and incorporates philosophical concepts as it explores how to become a better person.

As part of the aptly named The Good Class, Crawford is re-watching the show, completing readings, and engaging in conversation with students and faculty about how television helps shape the conversation between popular art and morality. 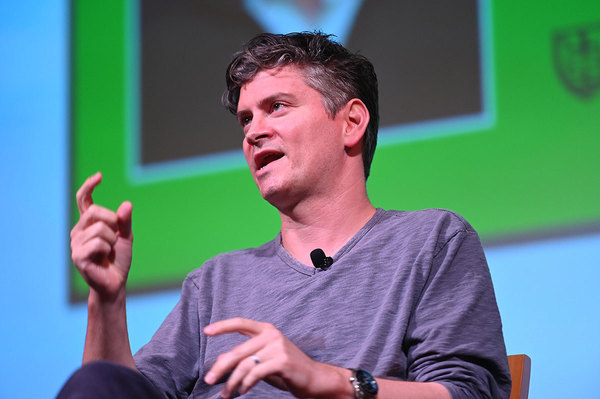 In a public event and visits to Notre Dame classes, Schur discussed his NBC comedy The Good Place, his creative process, and the philosophy introduced in the show.

That conversation expanded last Monday to include one very important voice — Mike Schur, the creator and executive producer of the show.

“I am so lucky to be at Notre Dame, where not only can this kind of huge meeting happen, but students can also get opportunities to learn something on a really individual basis,” said Crawford, who is majoring in film, television, and theatre.

Schur — who also created Parks and Recreation and Brooklyn Nine-Nine and was a writer, producer, and actor on The Office — came to campus to talk with Crawford and others in the 1-credit The Good Class about the series, his process, and the philosophy introduced in the show.

He also visited a combined meeting of multiple sections of the God and the Good Life introductory philosophy class and discussed the intersection of pop culture and philosophy at a public event at Washington Hall.

“It’s always nerve-wracking meeting someone whose work you admire, but he was very down-to-earth and funny in person,” Crawford said. “He was happy to joke with the class  and he had good insights about the creative process and how to improve your own work that I found really helpful as someone who wants to end up in a creative job.”

Schur was invited to campus by Meghan Sullivan, the Rev. John A. O’Brien Professor of Philosophy and creator of the God and the Good Life course, which challenges students to use philosophy to help them determine what it means to live a meaningful life.

She’s also team teaching the The Good Class with Christine Becker, an associate professor of film, television, and theatre, and Richard Herbst, the cinema program manager for the DeBartolo Performing Arts Center, offering students an interdisciplinary deep dive into a network half-hour comedy that’s concerned with topics that are at the center of a liberal arts education.

“One of the things that’s amazing about what Mike has done with The Good Place,” Sullivan said on stage during an event with Schur, “is that even if you’ve never taken a philosophy class, in every episode of this show, you’re getting a thought experiment and you’re learning the kinds of things you would learn in a great moral philosophy class.”

However, simply watching the show or learning the philosophical concepts is not enough if we truly want to live better lives, Sullivan said, which is where courses like God and the Good Life and The Good Class come in.

“You’ve got to do something. You have to have conversations with people,” she said. “You’ve got to wrestle with the real-world implications for your own life of these moral puzzles.”

“One of the things that’s amazing about what Mike has done with The Good Place, is that even if you’ve never taken a philosophy class, in every episode of this show, you’re getting a thought experiment and you’re learning the kinds of things you would learn in a great moral philosophy class.”

— Meghan Sullivan, the Rev. John A. O’Brien Professor of Philosophy and creator of God and the Good Life course

In his event with the God and the Good Life classes, Schur spoke with several hundred first-year students on how he became interested in philosophy, his approach to writing TV comedies, whether he believes people are inherently good, and whether The Good Place takes a stand on which philosophical theory to follow to become a better person. 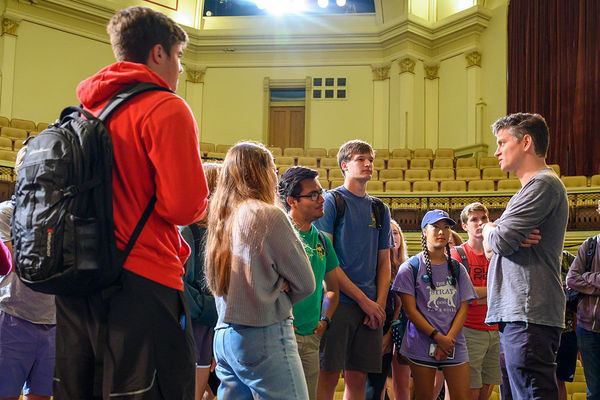 Schur talks with students after a God and the Good Life class session.

“The show began without taking a position, in part because I didn’t have a position,” Schur said. “Over time, that’s changed, and the show has really moved toward Aristotle. And that’s because Aristotle, in my mind, is the only one who says that it’s possible to make an attempt. He’s the one who says it’s like playing the flute — the more you practice, the better you get. And personally, I love that idea.”

Max Thompson, a first-year philosophy major, chatted with Schur after the class about the most challenging philosophical concept Schur has had to convey through the show — existentialism — and why young people should study philosophy.

“I love the God in the Good Life course and I was very excited, as were many of my peers, to have Mr. Schur come speak. His views on philosophy are quite similar to mine,” Thompson said. “I plan to go into law, and philosophy is a way to progressively teach myself how to think so that I can more critically approach the issues I will encounter.”

Not the bad place

In a public panel event, Schur, Sullivan, and Becker discussed whether television can make us better people. In that event, moderated by Peter Holland, the McMeel Family Chair in Shakespeare Studies and associate dean for the arts, Schur talked about the development of The Good Place, his career path, and the impact television can have — for good or bad.

“Any art form that millions and millions of people are engaging with, for an average of six to eight hours a day every day has the ability to do something,” Schur said. “In my personal opinion, yes, it can make you a better person, and that’s the explicit goal of this show.”

Through all of the events, Schur was an ideal guest for Arts and Letters, said Sarah Mustillo, I.A. O’Shaughnessy Dean of the College.

“We love taking up big, complex, and incredibly important questions — like, ‘how do we become better people? And how can we work together to improve the world? Then we examine these questions from every angle,” Mustillo said.

“Whether it comes from ancient writings or hit TV shows, we saw that both philosophy and television offer frameworks for discussing the questions we all wrestle with — a topic on which Mike Schur certainly offered instructive perspective.”

Originally published by Carrie Gates at al.nd.edu on September 25, 2019.