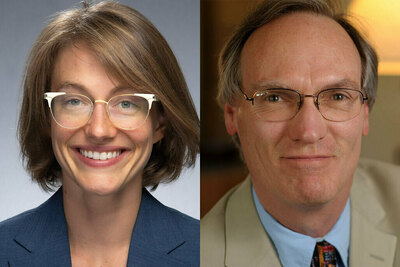 Intellectual humility — being free to think and listen without being concerned with the need to “be right” — could be an antidote for some pressing personal and societal problems.

An interdisciplinary group of philosophers and psychologists, supported by a John Templeton Foundation grant, are hoping to identify how the characteristic can be used by individuals to improve their lives and how it can be more inclusive.

“Intellectual arrogance and vanity can stifle conversation, learning, and discovery, which contributes to polarization, as well as ignorance about the lived experiences of other people,” said Laura Callahan, a Notre Dame assistant professor of philosophy and the principal investigator on the project. “We can’t listen and learn and come to know the truth about important subjects if we're caught up in defending our own views just because they’re ours.”

It might seem like a no-brainer that everyone could benefit from more intellectual humility (IH), but Callahan said that judgment might not take into account the variety of contexts — including oppression and marginalization — that shape people's lives.

While many people are overly confident and attached to their beliefs, Callahan said, others — including those conditioned to distrust their experiences and abilities — are underconfident. And some may be in situations where they have to be super confident, even dogmatic, to make themselves heard.

Thus, she said, it’s important to consider IH from the perspective of people routinely bombarded with messages that they’re ignorant or untrustworthy. That could include an abuse survivor who’s been gaslit about their memory of a troubling situation. Or a student from a marginalized group who’s been told their ideas aren’t worthy. Or a Black patient whose obstetrician doesn’t believe their description of troublesome symptoms.

These types of contexts piqued Callahan’s interest in IH and oppression. To learn more about the topic, she teamed up with Daniel Lapsley, the ACE College Professor of Psychology and director of the Moral and Adolescent Psychology Lab, to form an interdisciplinary working group as part of the two-year project.

Collaborating with experts in psychology is fitting, she said. Philosophers think critically about what’s morally and epistemically valuable about IH across contexts, and psychologists examine how IH manifests and develops in people’s lives, which traits accompany it, and what life experiences it predicts.

“We can’t run empirical studies well without knowing what’s worth calling intellectual humility,” she said. “But neither can we theorize productively from the armchair about what traits are valuable for people to have, especially when we want to think about people in contexts of oppression and marginalization who may not closely resemble the philosopher sitting in said armchair.”

Callahan will read, write, and present ideas to philosophers, and the interdisciplinary working group will meet virtually biweekly and convene for a summer 2023 workshop in Chicago. Callahan and Lapsley have brought on several psychologists and philosophers from other universities to provide insight, and fellows in residence at the Center for Philosophy of Religion will consider questions related to intellectual humility and oppression in 2023-24. Additional leading thinkers from epistemology and ethics will be invited to a capstone conference in 2024.

Callahan, who is also associate director of the center and an affiliated faculty member with the Gender Studies Program, said one project goal is to develop and inspire new definitions, or accounts, of intellectual humility, including those that are sensitive to experiences of oppressed and marginalized people.

“Intellectual arrogance and vanity can stifle conversation, learning, and discovery, which contributes to polarization, as well as ignorance about the lived experiences of other people. We can’t listen and learn and come to know the truth about important subjects if we're caught up in defending our own views just because they’re ours.”

She described humility and IH as disputed “virtues” — or desirable behaviors that indicate high moral standards. Aristotle and Friedrich Nietzsche didn’t even think they were virtues, but Jesus Christ and Iris Murdoch thought they were central to the good life.

A significant controversy, she said, is whether calling these traits “virtues” is just a way for the powerful to continue to subjugate the oppressed.

“I am really interested in whether you can celebrate humility as a central virtue for all people in a way that helps ameliorate, rather than exacerbate, oppression and marginalization.”

In the near term, the project will encourage participating philosophers and psychologists to incorporate relevant readings and discussion topics into their graduate and undergraduate teaching. In the longer term, Callahan said new theories of IH could be applied in the social sciences through measurement and the development of interventions or pedagogical techniques.

Increasing IH, ultimately, could have significant ramifications for education and other efforts to improve public discourse.

Originally published by Beth Staples at al.nd.edu on September 21, 2022.