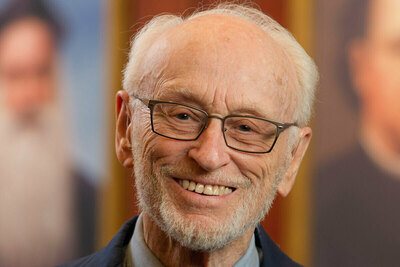 Kenneth M. Sayre, a University of Notre Dame professor emeritus of philosophy and an early leader in the study of artificial intelligence, has died at age 94.

Sayre, a member of the Notre Dame faculty for 56 years, was known for his teaching and research across a broad range of areas, including cybernetics, information theory, philosophy of mind, environmental philosophy, Plato, and epistemology. He authored 14 books, edited or co-edited five more, and published more than 50 articles in scholarly journals.

“With Ken’s passing, we in the Department of Philosophy lost a remarkable friend and colleague,” Paul Weithman, the Glynn Family Honors Professor of Philosophy, said. “Despite a teaching load that would seem almost unbearably heavy 50 years on, Ken was a prolific publisher from the outset, and was at the leading edge of a cohort of scholars who began to transform the department into the leading center of philosophical work that it is today.

“Those of us who teach philosophy at Notre Dame now owe an incalculable debt to those who effected that transformation, of whom Ken was among the very first.”

Born in 1928 in Scottsbluff, Nebraska, Sayre spent two years in the U.S. Navy before graduating from Grinnell College in Iowa with a joint major in philosophy in mathematics. His interest in AI began while earning his doctorate at Harvard University, when he worked in MIT’s Lincoln Laboratory on an air-defense system.

He joined the Notre Dame faculty in 1958, and four years later he won a National Science Foundation grant for research on the simulation of mental processes that would blend science with philosophy.

After he received a second grant in support of this research, the University established the Philosophic Institute for Artificial Intelligence in 1965, with Sayre serving as director. That same year, he published Recognition: A Study in the Philosophy of Artificial Intelligence, and began lecturing and making media appearances discussing issues related to cybernetics and automation.

For many years, his research involved developing computer software that could recognize handwriting, based on his theory that “understanding of a type of human behavior and our ability to simulate it go hand in hand." His work led to him recognizing a key problem that became known as “Sayre’s paradox” — a cursive word cannot be recognized without being segmented and cannot be segmented without being recognized — that continued to be a focus of handwriting recognition technology in subsequent decades.

After the Vietnam War, Sayre shifted his focus to ethical and social issues. Sayre led an NSF-funded interdisciplinary team that included 11 Notre Dame faculty from all five colleges, a nuclear engineer, philosopher Alasdair MacIntyre, and others in a deep study of energy companies’ decision-making processes and values. The work resulted in a book on the subject, as well as another volume, Ethics and Problems of the 21st Century, containing essays from moral philosophers.

He continued teaching and researching until his retirement in 2014, the same year he published Adventures in Philosophy at Notre Dame, a book detailing the history and development of his department.

Sayre married Lucille M. Shea in 1958, and they had three children together — Gregory, Christopher, and Jeffrey. Lucille died in a car accident in 1980. In 1983, he married Patricia A. White, with whom he had a son, Michael.

Paul Weithman's full reflection on the life of Ken Sayre:

With Ken Sayre's passing, we in the Philosophy Department lost a remarkable friend and colleague.  Ken came to Notre Dame at a time when its research aspirations were much more modest than they are now.  Despite a teaching load that would seem almost unbearably heavy fifty years on, he was a prolific publisher from the outset, and was at the leading edge of a cohort of scholars who began to transform the department into the leading center of philosophical work that it is today.  Those of us who teach philosophy at Notre Dame now owe an incalculable to debt to those who effected that transformation, of whom Ken was among the very first.

Ken's philosophical interests were broad, ranging from ancient philosophy -- where he focused on his beloved Plato -- to the roots of the environmental crisis.  They were also prescient.  Ken saw the philosophical interest and implications of artificial intelligence before other philosophers did, and published pioneering work on the subject.

I first met Ken in my sophomore year of college, when my colleague Dave O'Connor and I took an undergraduate seminar he taught.  As much as I have admired Ken Sayre the philosopher since then, I have admired Ken Sayre the person even more.  His fitness regimen and his work ethic qualified him one of the most disciplined people I've ever known.  He was a man of deep faith who found a home in the Catholic Church later in life, through a journey he recounts in the very moving closing pages of his manuscript Complexities of Religious Belief.  He built a beautiful marriage and family life with Patti after the tragic death of his first wife Lucille.  The regularity of Ken's presence in his office and the almost metronomic rhythm of his publication rate were constants of departmental life.  Yet the constancy belied a capacity for personal and spiritual resilience and growth that I think of as Ken's most valued legacy.

A reflection from David O'Connor, professor of philosophy:

Professor Ken Sayre sometimes first struck students, and younger colleagues, as a rather daunting presence, with a seriousness and no nonsense demeanor reflecting his Nebraska roots. He certainly held students to high standards of precision and brevity. But Professor Sayre was also much admired and sought after as a teacher and mentor. His advanced seminars on Wittgenstein and on Plato were pillars of the curriculum for generations of philosophy majors, and prepared many of us, including myself and my colleague Paul Weithman, for the rigors of graduate study. For decades he also inspired students of every sort with his signature courses for a more general audience, "Philosophy and Fantasy" and "The Question" (for the uninitiated, What is the Meaning of Life?). For me, Ken was an essential teacher, mentor, colleague, and friend; the world is poorer without him.