The Midwest Epistemology Workshop (MEW) aims to advance interest in epistemology by organizing an annual workshop for the presentation and discussion of current work in the field. MEW also aims to establish a sense of community among epistemologists in the region that stimulates new research, improves its quality, and facilitates its dissemination. To this end, the workshop will be organized to encourage as much discussion and interaction as possible among the participants. Although 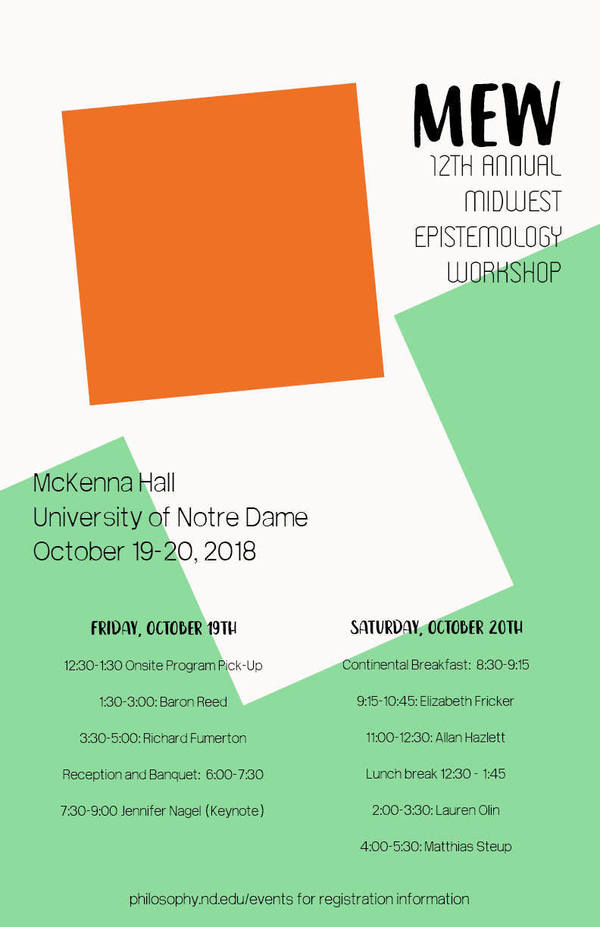 The University of Notre Dame will be hosting the 12th annual meeting of the Midwest Epistemology Workshop on October 19 – 20, 2018.workshops will typically be hosted by a college or university in the Midwest, all philosophers with an interest in epistemology are invited and encouraged to attend.

The deadline for registration will be October 8th. Register here.

The nicest and most convenient choice for accommodations is the Morris Inn, on campus

For weekday parking there are various rates. The closest parking options are the Morris Inn parking lot and the designated Visitor Lot. The former is much closer but costs $10 for mandatory valet parking. The latter costs per hour, at the following rates.

Parking at the Visitor Lot may be combined with short-term free parking at three other lots. First, there is complimentary valet parking in the Morris Inn parking lot for guests dining at Sorin’s or Rohr’s (both inside the Morris Inn). Second, people eating at Legends can park there for free, for as long as they are dining. Third, the Hammes Bookstore has free one-hour parking. Please click here and then select the “Visitor Parking” layover for a map of these lots, and click here for further parking information.

On Saturday, parking will be complicated by the Garth Brooks concert in the stadium. If you able to park anywhere nearby off-campus (e.g., at the Fairfield Inn or Ivy Court), we highly recommend leaving your car there. If you do not have any nearby off-campus parking, we will need to make special arrangements for you on Saturday. In that case, please contact Blake Roeber (roeber.2@nd.edu) as soon as possible.

Please note that, with the concert, nearby off-campus parking will be virtually impossible to find if it is not included with your lodging.

The tentative schedule for the conference is below. We are happy to announce that Baron Reed, Professor of Philosophy at Northwestern University, has agreed to replace Andrew Cullison, who had to withdraw because of an unavoidable conflict. We expect Baron's paper to be posted in advance, but given the short time available we do not know when this will be. We anticipate that the other papers yet to be posted will come in shortly.

We are also pleased to announce that there will be a pre-conference paper by Annalisa Coliva, of UC Irvine. This will take place at 11 AM, Friday, October 19 in 119 O'Shaughnessy. Her title and abstract are posted below the conference abstracts.

When a recipient of testimony takes the speaker's word on her topic, it feels natural to say that she trusted the speaker, at least with respect to her utterance. I sketch an account of trust that vindicates this feeling - roughly, one trusts someone with respect to her telling when one relies on her to speak from knowledge due to relevant epistemic and character virtues. There is a tendency in literature on testimony to think that one trusts a speaker only if one takes her word without requiring evidence of her trustworthiness. This is false, stemming from a confusion of trust with epistemic faith. The hallmark of trusting someone to act in a manner on which one is relying, is not that one does so without wanting evidence that they are such as to be trusted; but that one does not put in place a Plan B, to fix things if they fail to act as one relies on them to. For instance, I trust you to pay back money I lend you, not because I do so without evidence of your honesty and general competence in running your financial affairs - which would be foolish - but because I do not require you to sign a legally binding contract saying you will repay me, trusting instead in your relevant virtues to ensure you do so. But there is another reason that more properly motivates talk of trusting a speaker. Though, in my view, justified testimonial trust rests on relevant evidence of the speaker's honesty and epistemic competence, in any normal testimonial situation the recipient does not have knowledge which entails that what the speaker says is true, expressing her knowledge. The inference a recipient is placed to make from 'A told me that P', to P, is an inductive empirical inference, not an entailment. Despite everything one knows of her, the speaker could yet be lying, or honestly mistaken. Thus there remains an element of epistemic risk - as with other inferences concerning human behaviour and motivation - in taking the speaker's word.

When one discusses skepticism with undergraduates, many students react to the skeptic’s attack on the possibility of knowing some proposition P by retreating to the safer claim that one can at least know that probably P.  If one responds this way to the worry posed by traditional skeptical scenarios, consistency might seem to force one to the odd sounding conclusion that there are very few contingent propositions one should claim to know. One should, instead, only claim to know that such propositions are probably true.  While many are happy to move in that direction, they start to get nervous if they become convinced that the justification they have for believing propositions about probability is itself fallible justification, i.e. justification that is, as far as they can tell, consistent with the proposition about probability itself being false.  They don’t want to be backed into a corner in which, if they are to be precise, they should concede of a contingent proposition P that they only know that it is probable that P is probably true.  And once they have admitted fallibility with respect to first-order probability claims, of course, it’s hard to see how they can suddenly become infallible with respect higher-level claims.  We don’t want to be in the unfortunate position of being unable even to complete our knowledge claims when our justification is fallible. In what follows I’ll explore reasons, some older, some more recent, for thinking that one should protect what one claims to know and justifiably believe with at least one round of probability operator.

Some of the most interesting rules governing human conversations are epistemic in nature: in fact, it is argued that conversational turn-taking is fundamentally driven by the creation and resolution of epistemic imbalances. Drawing on recent work in conversational analysis, this paper argues that our natural vulnerability to epistemological skepticism is at least in part a by-product of the background epistemic monitoring system that supports ordinary conversational exchanges.

Recent work in the psychology of human judgment has emphasized the importance of emotional dispositions in the pursuit of broadly epistemic ends.  Philosophers, too, have recently become interested in empirical and conceptual questions about the connection between human emotional dispositions and distinctively epistemic ends like true belief and knowledge. Despite growing acceptance of the idea that emotions are relevant to epistemology, however, questions about the natures of the dispositions that undergird them persist. This paper provides a taxonomy of epistemic emotions, and a theoretical framework designed to evaluate their roles in the genesis and maintenance of belief systems.

It is commonly taken for granted that knowledge and doubt exclude one another: where one knows, one does not doubt, and when one is in doubt, one cannot know. Although this is a plausible element of infallibilism, which takes knowledge to amount to certainty, it does not fit well with fallibilism. I look at two different instances in which this understanding of the relation between knowledge and doubt has caused mischief. The first has to do with the way scientific claims have been taken up in public debate. The second is Moore’s proof of an external world. I argue that knowledge and doubt are not incompatible, articulate conceptions of both knowledge and doubt that explain why this is so, and suggest some ways in which we may evaluate and ameliorate unanswered doubts.

The conference will take place at the McKenna Hall Conference Center, which is located across the street from the Morris Inn. More information here.